Remontowa Shipbuilding SA with the award Defender MSPO 2021 in Kielce 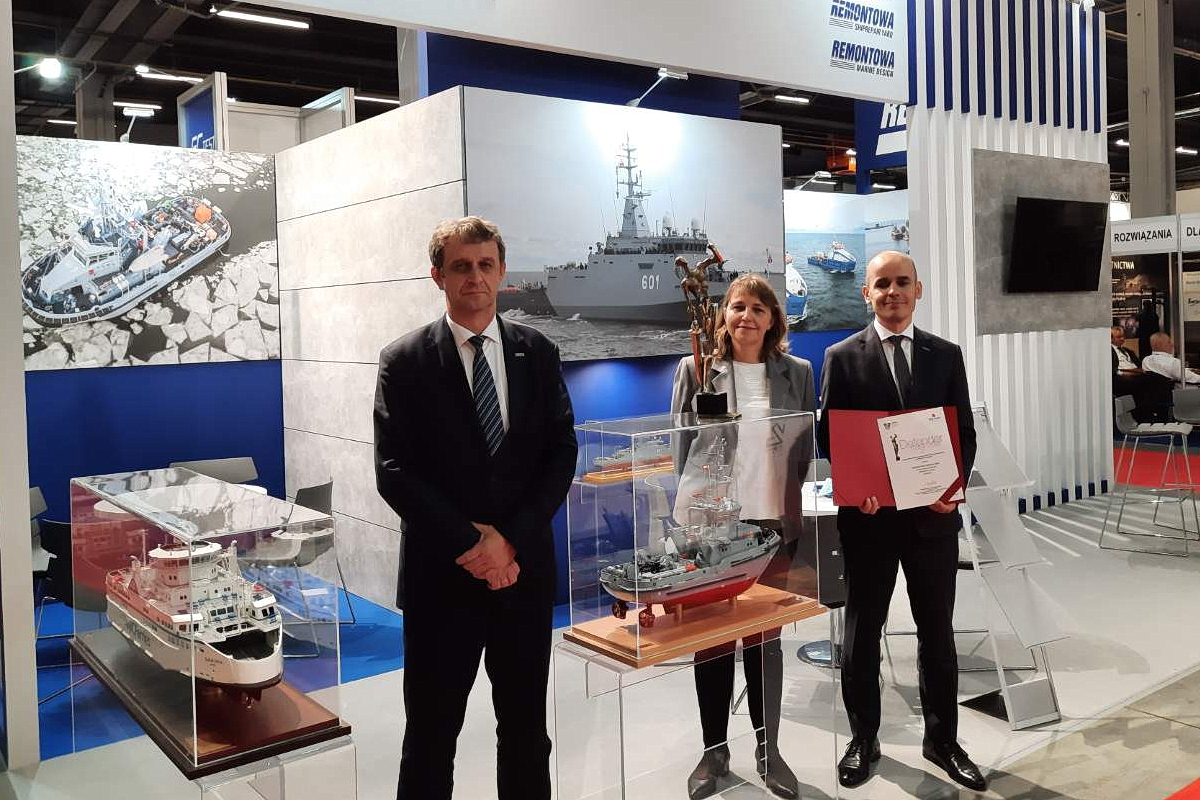 Remontowa Shipbuilding SA has received the Defender award for a series of six tugboats (B860) for the Polish Navy. This award is granted every year by the Programme Council of the International Defence Industry Exhibition MSPO in Kielce.

For 29 years, in September, the International Defence Industry Exhibition has become a place for presenting the greatest achievements of the arms industry from all over the world. On the stands of Polish and foreign leaders of the defence industry there were presented, among others, armament and aviation equipment, air defence equipment, as well as the necessary armament of navy units.

One of the final touches of MSPO is the ceremonial Gala, during which the Defender awards are granted.

The idea behind the competition is to award products distinguished by originality and innovation of technical thought, exploitation values and favourable economic indices. Almost as many products competed for the Defender award this year as in pre-pandemic times. The judging panel considered 77 entries.

The award for a series of multipurpose auxiliary vessels built for the Polish Navy was received by Dariusz Jaguszewski – a member of Remontowa Shipbuilding SA Management Board.

State-of-the-art in its class

Stocznia Remontowa Shipbuilding SA in 2017-2021 built and handed over to the Polish Navy six vessels prepared to perform a very wide range of tasks under the programme: “Technical security and rescue operations at sea pk. HOLOWNIK”.

The Tugboat Programme is the first fully implemented naval programme associated with the construction of new vessels as part of the Technical Modernisation Plan for the Polish Armed Forces.

These vessels were built by a Polish shipyard on the basis of construction documentation developed by a Polish design office. More than 80 percent of the equipment was provided by Polish suppliers. Instruction manuals for use, maintenance and repair were developed by a team of shipyard engineers. The construction of the tugboats was supervised by the Polish Register of Shipping.

Tugboats are intended, among other things, for combat security and logistic support at sea and in ports, technical evacuation operations, rescue support, transport of people and supplies, fire fighting, pollution neutralisation and taking torpedoes out of water.

They have a modern propulsion system consisting of two latest generation diesel engines, each with a power of 1193 kW. Through two lines of shafts and bevel gears, they drive the propellers in the nozzles of the two azimuth thrusters, giving the vessels excellent manoeuvrability and a pile pull of 35T. This is of great importance for one of the main tasks, which is to assist larger ships when manoeuvring in harbour basins where space is limited, and to guide them through sensitive areas.

Additionally, the location of the ship’s bridge, much higher than in older generation tugs, increases the visibility of the vessel’s surroundings. Modern bridge equipment ensuring ergonomic operation gives the possibility of viewing operating parameters of engine room devices and mechanisms. 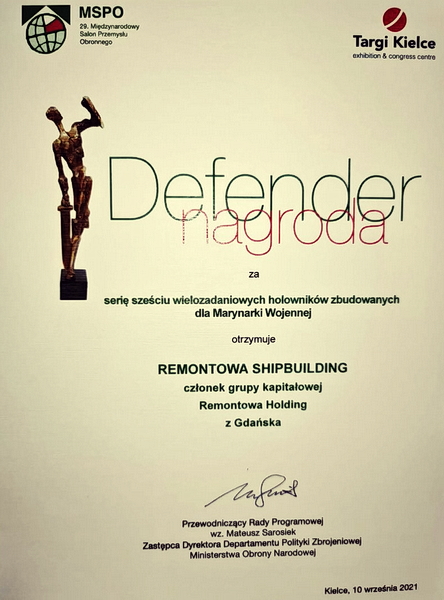 Participation in firefighting operations is possible thanks to two water cannons controlled both from the bridge and directly from the stern via a portable control station. The pump, pumping seawater as an extinguishing agent, is connected via a clutch to one of the main engines, giving it a capacity of 2,700 cubic metres per hour with a jet range of 120 metres. In the event of the need to evacuate passengers of other vessels, the vessels can take 50 people on board.

They feature a contract displacement of 490 tonnes and the ability to carry 4 tonnes of cargo on the open deck. They also have equipment for transporting and picking up practice torpedoes from the water. The tugs have also been adapted to collect oil substances from the sea surface. For this purpose, they have a 300-metre-long pneumatic dam, which is set up and fences off oil spills, which are then collected in a special tank using a skimmer.

The ice class of the tugs allows them to operate in difficult hydrological conditions and, assisted by icebreakers, even in severe ice conditions. The fuel reserve is sufficient for 7 days, while the autonomy of the tugs is 5 days. They are manned by a 10-person crew with seven cabins (four single and three double).

These vessels are larger than standard tugs, whether in Navy service or among civilian vessels. They are over 29 metres (29.2m) long and over 10 metres (10.47m) wide.